Where the water's edge ends, the Stormwater Management begins..

Stormwater is precipitation that accumulates, in natural/constructed storage and stormwater system, during and immediately following a storm event.

In 1997 the Environmental Protection Agency (EPA) extended the National Pollutant Discharge Elimination System (NPDES) permit requirements of the Municipal Separate Storm Sewer Systems (MS4) that had, as of 1990, was applied only to medium and larger municipalities. By 2003, the policy extended to smaller jurisdictions for them to obtain permit coverage. The City of Inverness received its permit on October 1, 2019 and it is in effect until September 30, 2024.

The City of Inverness, Department of Public Works is proud to do its part in protecting the environment. We work to minimize the entry of pollutants into its precious water resources and to provide the community with good, safe drinking water. We are also doing our part to help lake waters swimmable, and protect a quality habitat for fishing and water sports.

The central plans for the City are to grow as a desirable community in which to live, work, and play. An important concern regarding such growth is the risk of pollution, and one form rarely discussed, is stormwater runoff. In urban areas, such as Inverness, much of the land is covered by buildings and pavement, which prevents rainwater from soaking into the ground.

The City Stormwater System Map has been verified and updated; including 12 documented outfalls along with receiving bodies of water. We will review current ordinances, in the land development code, to determine if any changes are needed. Informational fliers have been developed and are being distributed to the public and building contractors. 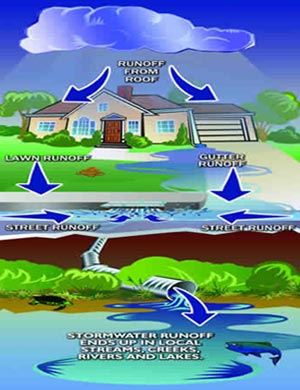 How You Can Help

You can make a difference to the future of Florida's water systems. We can all contribute to a safer water supply and healthy future for all generations to come. Here are some things you can do to help improve natural water resources:

How Businesses Can Help

If you have any questions or comments please contact the Public Works Department at (352) 726-2321 or PublicWorks@Inverness.gov.