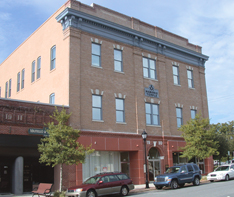 Masonic Temple
The Citrus Masonic Lodge #118, F and AM, was designed by prominent Florida Architect, Wilbur Burt Talley, dedicated in 1910 and ready for occupancy by January 1911. The costliest building in the county at the time, it was a splendid 3-story brick construction that cost $17,285. Originally, the 1st floor housed 2 stores, the 2nd floor had 5 offices and the 3rd floor was the Lodge Room for the Masons and Eastern Star. After the dedication ceremony, a Crowd between 1800-2500 people flocked to the picnic grounds at the end of Apopka Avenue, near the residence of W.H. Warnock. There they feasted on barbecued meats, fried fish, chicken pileau, baked and boiled ham, salads, pies of every kind, thousands of loaves of bread, pickles, various cakes, fruits, barrels of ice water and jugs of excellent coffee. The town's coronet band played "Dixie" and other tunes.

Walter F. Warnock, Sr., was worshipful master of the lodge at the time the temple was built. He also served as Clerk of Circuit Court and editor/proprietor of the Chronicle. At one time, there was a movie theatre and City Hall on the 2nd floor as well as professional offices. Dr. TS Henley & Dr. Harrel Martin, Dentists, Dr. Claude Carter, Dr. Cranford & Dr. Gail Osterhout, Attorneys Mannie Scofield, George Scofield, Charles Fitzpatrick, and Donald Bradshaw. For many years, Hall's Drugstore occupied the 1st floor.

In 1963, lightning struck the building causing fire damage. After restoration, it was decided a new building should be built, and in 1965, the Masons & Eastern Star moved to their new location at Zephyr Street & Hendrix Avenue, selling the 1910 Masonic Temple to a private company. Through a program created by the City of Inverness, a historic plaque was placed on the building on October 20, 2000. At the time, the Citrus County Commissioners were leasing the 3rd floor early in the 1990's and occupied the building until 2003.