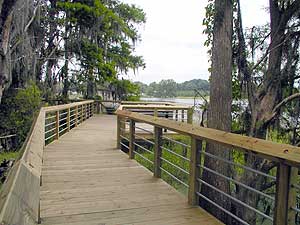 The Liberty Trail boardwalk along Lake Henderson connects Liberty and Wallace Brooks parks with a meandering walkway through cypress and palm trees. The boardwalk is situated between the lake and the Withlacoochee State Trail for bicyclists and other recreational enthusiasts. A 46-mile stretch of former railroad tracks that have been converted to a paved multi-use trail for hiking, jogging, horseback riding and bicycling.

While joggers and others create steady activity on the trail, it's foot traffic only on the boardwalk, offering a quiet change of pace. Bring a book and sit at one of the benches on several of the overlooks. Boaters, motorized and not, may be spotted enjoying the tranquil waters, including fishermen in the middle of the lake looking for that prized catch.

Wildlife Watch
Though quieter than some nearby parks, rest assured you won't be alone walking the Liberty Trail. Grey squirrels often run along the handrails as they prepare to forage for food in the marsh below. Herons, egrets and other waterfowl often stand among the reeds and lily pads looking for small fish, while alligators and turtle are a fairly common sight a little further away from the boardwalk.

Several species of water snakes have been known to drop by here and there, though usually not in the winter months. The snakes and gators are a pretty effective case for why swimming is not allowed at city parks except the Whispering Pines Park pool; diving from piers (and boardwalks) is also prohibited.